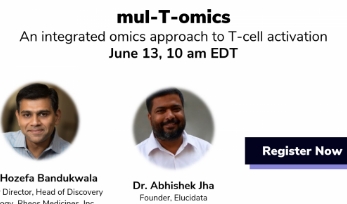 In this project, we use parallel transcriptomic and metabolomic profiling. Our study identified metabolic modules that could be targeted in intractable immune disorders.

Here’s a look at the abstract for our paper published in bioRxiv.

Specifically, increased expression of several enzymes such as CTPS1, IL4I1, and ASL results in the reprogramming of amino acid metabolism. Additionally, the strength of TCR signaling resulted in different metabolic enzymes utilized by T cells to facilitate similar biochemical endpoints. Furthermore, this study shows that cyclosporine represses the pathways involved in amino acid and glucose metabolism, providing novel insights into the immunosuppressive mechanisms of this drug. To explore the implications of the findings of this study in clinical settings, conventional immunosuppressants were tested in combination with drugs that target metabolic pathways. Results showed that such combinations increased the efficacy of conventional immunosuppressants. Overall, the results of this study provide a comprehensive resource for identifying metabolic targets for novel combinatorial regimens in the treatment of intractable immune diseases.‍

You can go through the full paper here – Read Full Paper

IntOmix : The new way to do multi-Omics

IntOmix is a part of our growing repertoire of Polly enabled services at Elucidata. Our Drug program support utilizes the array of products on Polly to help you accelerate the search for clinically relevant targets. Here’s a little bit more information about IntOmix.

The recent development of various omics technologies in biology has increased the systems level analytical methods. Multi-omics data integration provides an opportunity to understand the cellular or tissue level environment as a whole. Polly IntOmix is an application specifically geared towards integrated network analysis of multi-omics. It focuses on the identification of significantly changing metabolic network module between two experimental conditions.

Integration of data generated by these two approaches can give simultaneous information about metabolomic changes along with the transcriptional changes.

View Polly IntOmix in action in this detailed demo video.

Want to learn more about Polly IntOmix? Book some time with one of our experts and they will walk you through the platform.

To learn more on this topic, we are hosting a webinar on June 13, 10 am Eastern Time. This webinar would feature Dr. Hozefa Bandukwala himself, accompanied by Dr. Abhishek Jha, Founder, Elucidata. They talk in detail about our work, and you can ask any questions you have. Register for the webinar before the seats fill up!

Here’s a look at some of the most insightful studies published this year around this topic. These studies underscore the importance of metabolic pathways in modulating T cell function.

Glutamine metabolism and the mechanistic target of rapamycin (mTOR) pathway are activated cooperatively in the differentiation and activation of inflammatory immune cells. But the combined inhibition of both pathways was rarely investigated. This study investigated how inhibiting both glutamine metabolism with 6-diazo-5-oxo-L-norleucine (DON) and mTOR with rapamycin affects immune cells and arthritis in a mouse model. We revealed that rapamycin and DON additively suppressed CD4+ T cell proliferation, and both of them inhibited Th17 cell differentiation.

Metabolism as a guiding force for immunity

Recent studies indicate that cellular metabolism plays a key role in supporting immune cell maintenance and development. Here, we review how metabolism guides immune cell activation and differentiation to distinct cellular states, and how differential regulation of metabolism allows for context-dependent support during activation and lineage commitment. We discuss emerging principles of metabolic support of immune cell function in physiology and disease, as well as their general relevance to the field of cell biology.‍

Competition for nutrients and its role in controlling immune responses

Changes in cellular metabolism are associated with the activation of diverse immune subsets. These changes are fuelled by nutrients including glucose, amino acids, and fatty acids, and are closely linked to immune cell fate and function. An emerging concept is that nutrients are not equally available to all immune cells, suggesting that the regulation of nutrient utility through competitive uptake and use is important for controlling immune responses. This review considers immune microenvironments where nutrients become limiting, the signaling alterations caused by insufficient nutrients, and the importance of nutrient availability in the regulation of immune responses.‍